In March, over a year before Tani's arrival, Barton-Wright had an article published in Pearson's Magazine under the title "The New Art of Self Defence". Barton-Wright had studied jujutsu while living in Japan, and his "New Art," which he immodestly called "Bartitsu," combined jujutsu with boxing and savate.

Briton Ernest J. Harrison (1883-1961), the third European to earn shodan ranking in Kodokan judo, publishes The Fighting Spirit of Japan.(London,Foulsham, 1912) This was the first English-language book to describe judo and other modern Japanese martial arts from an insider’s perspective.

Gunji Koizumi (1885-1965) opened a DOJO in London, England. It is called BUDOKWAI.. His first chief instructor was Yukio Tani (1881-1950). Koizumi Gunji   (1885-1965) establishes the Budokwai at 15 Lower Grosvenor Place in London. This was not Britain’s first judo club. That was probably Barton-Wright’s school. It was not even the first KODOKAN judo school. That was the Cambridge University Jujutsu Club, which was organized about 1906. However, it was the first British judo club open to the general public that continued to operate into the 21st century. 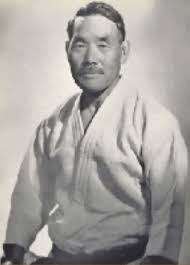 As a result of Kano’s visit, the BUDOKWAI of London adopted the principles of KODOKAN judo.

KOIZUMI's vision for the growth of judo on an international basis began to materialize in 1948. On 24 July in Committee Room A at the Imperial College Union, Prime Consort Road, London, the British Judo Association has its first Management Committee Meeting at which the Association was formed.Four days later a meeting under the chairmanship of Trevor Leggett, the most senior non-Japanese player in the world, approved the constitution of a European Judo Union (EJU) to represent judo in the continent of Europe

In July the representatives of nine countries met in London, Soho to form the International Judo Federation (IJF). 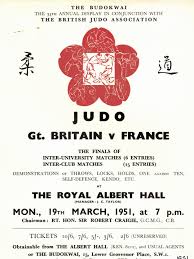 Charles PALMER  becomes Chairman of the British Judo Association. A post he held for the next 24 years.

1st British Open for women was held at Crystal Palace in London.

Womens JUDO included as a full sport in the Barcelona Olympics

Charles PALMER receives his 10 DAN – The first non-Japanese person to receive the award. It is by IJF not by Kodokan.

BJA moves to its new offices in Loughborough

Kate Howey MBE chosen to carry Great Britains flag at the Opening ceremony of the 2004 Athens Olympics.  Kate is the first judo player to receive this honour. Japanese JUDO champion and pioneer. A 5th DAN in JUDO by 16, Abe also studied aikido, kendo and jukendo. He taught at the JUDO College within the Butokukai in Kyoto in the late 1930s and by 1945 was a 7th DAN. He became chief instructor at Doshisa University as well as instructor to the kyoto Police Department.

Abe went to England in 1955 at the invitation of the London JUDO society and opened his own club one year later. A leader of the British JUDO Council he became a highly sought after instructor; however, because he believed that competition victory was not the ultimate goal of JUDO, he encountered opposition at a time when JUDO was gaining popularity as a sport. In 1970, he sufferd serious injuries in an automobile accidnet from which he had not fully recovered four year later when he returned to Japan.

British JUDO instructor and coach of British National JUDO Team. He was the first non-Oriental to became a special research student at the KODOKAN, studying there from 1952 to 1955. In 1955, he was appointing chief instructor of the BUDOKWAI, and two years later, captained a British team that won the European JUDO Championships. He is the author of JUDO for the West, The Anatomy of JUDO, and Better JUDO.

British journalist, author, diplomat, linguist, and martial artist. In 1919, Harrison joined London’s BUDOKWAI, England’s JUDO mecca, and remained an active member until his death at age 88. He was the first Caucasian to become a 3rd-degree black belt in JUDO, during the mid-1900s. The first Westerner to write prolifically about the martial arts, Harrison wrote his classic, The Fighting Spirit of Japan, in 1912. The book examines the esoteric principles of the Japanese martial arts.

British JUDO coach
Roy Inman hold the grade of 9th Dan, and was the High Performance Judo Coach at the University between 1999 and 2006, before moving to the role of Judo Technical Director.

He was the British Judo Association National Coach for over 15 years, has coached at 3 Olympic Games, and his players have won 6 Olympic medals and 13 World Championships.

He is a director of the British Judo Association, was awarded the U.K. coach of the year in 1991, the O.B.E. from H.M. the Queen in 1992 and a Full Blue from the University of Bath in 2001.Roy received his 1st dan from Trevor Leggett in 1969, and in 2013 he was awarded 9th dan of the International Judo Federation.

He is a British JUDOKA who won Britains first medal at a world championship, taking a bronze in Salt Lake City in 1967, and gained a second bronze at the 1972 Munich Olympics. He later achieved national fame for his outstanding "Gym Test" performances on the BBC programme Superstars.His victories in the British and European Superstars lead to the creation of the branded computer games: Brian Jacks Superstar Challenge and Brian Jacks UCHI-MATA... After retiring from judo he opened a fitness and martial arts club, and in 1990 he started a company hiring bouncy castles.

Scottish JUDO champion. Kerr won three Europan silver and two bronze medals during the 1960s. A member of the British team, in the middleweight category and open events. His excellent range of ground work techniques, superb UCHI-MATA(innerthigh throw) and knowledge of amateur wrestling (he represented Britain in the 1965 WORLD CHAMPIONSHIPS) contributed to his succes. Kerr won the 1966 and 1968 British Open middleweight titles before retiring.

He was one of the first athletes to go to Japan, study there and brought the skills of physical training and the philosophy of judo to Britain and to Europe. He trained with Anton GEESINK, one of the seven 10th Dan graduates, and still a friend of KERR.

After his judo career where he won European individual medals and with the British Team in the late fifties and early sixties, Kerr developed himself as an international referee. He refereed at two Olympic Games (1972 and 1976) and at three World Championships between 1969 and 1975. He retired as international referee in 1976.

Later Kerr was a coach of many many fighters. At the Edinburgh Judo Club he had an exchange program with the Tokai University where champion came to Scotland to learn English and to train at Kerr’s club. Yoshi Nakamura, Hidetoshi Nakanishi, both world champions were trained by Kerr.

Later Kerr was a coach of many many fighters. At the Edinburgh Judo Club he had an exchange program with the Tokai University where champion came to Scotland to learn English and to train at Kerr’s club. Yoshi Nakamura, Hidetoshi Nakanishi, both world champions were trained by Kerr.

In 2010 he was awarded the grade 10th DAN for international services to JUDO He is one of only five non-Japanese out of 19 people ever to be awarded this honour. He is the second Briton after Charles PALMER and the youngest person ever to have gained the rank of 10th DAN in JUDO 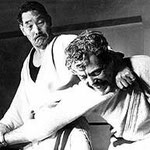 Japanese JUDO master (8th DAN) who was the father of European JUDO, founding the BUDOKWAI in 1918. He was first proficient in JUJUTSU but switched to JUDO. A dedicated instructor, he founded clubs all over Europe, leading to the establishment of both the British JUDO Association and the EUROPEAN JUDO UNION. He was an Oriental art expert, practiced calligraphy, and helped to introduce Buddism into Britain. He taught at the BUDOKWAI until the day before he died. (See Sec. BOOKS on JUDO)

British JUDO instructor. For many years the highest-graded non-Japanese JUDOKA and the first Englishman to go to Japan specifically to study JUDO. In 1932, he joined the BUDOKWAI and studied under Yukio TANI. He studied law at the University of London graduating in 1934. He was a 3rd DAN and captain of the British team when he went to Japan in 1938; In 1946, he was appointed head of the Japanese section of the B.B. C. and during the following 15 years trained almost every leading JUDO fighter in Britain at the BUDOKWAI. He is a prolific writer on poetry, Buddhism He published 30 books. He was awarded the Order of the Sacred Treasure by the Japanese Government in 1984

Japanese-born JUDO pioneer. He England in 1919 and practiced at the BUDOKWAI. In 1927 he began teaching JUDO at Oxford and Cambridge Universities, and in 1932 he became instructor at the Anglo-Japanese Club.After the war he taught the military and police forces. In 1958, Otani joined the British Judo Council under Kenshiro ABE becoming its leader in the mid-196s when ABE returned toJapan. He continued teaching in England until his deaath.

British JUDO instructor. The President of INTERNATIONAL JUDO FEDERATION (1965-1979). He started JUDO when he was 15. The founder of British JUDO. Gunji KOIZUMI and 8th DAN Trevor LEGGETT, were his teachers. He won a black belt in 1948 and went to Japan in 1951 to work at the British Embassy and study at the KODOKAN. During his four years in Japan, he studied under Kyoshi Kobayashi and the late 10th DAN Kyuzo MIFUNE. In 1957, he was a member of the British team which won the European title for the first time and the following two years he captained the British JUDO team. As president of the INTERNATIONAL JUDO FEDERATION, he was chiefly responsible for the reintroduction of JUDO to the Olympic programme and for the standardization of the international contest rules which he carried out in collaboration with the KODOKAN

British JUDO champion. In 1971, he was a member of the British team that captured the European title, and he won the bronze medal at 1971 World JUDO Championships. In 1972 he captured the silver medal in the light- heavyweight division of the Munich Olympics and also the European title. The following year, he won a silver medal at EUROPEAN CHAMPIONSHIPS and a bronze in the WORLD CHAMPIONSHIPS In 1976 he won a bronze in the Montreal Olympics. Now retired. He currently lives in France where he is a judo instructor and is a credited cliff jumper. His son, Leon, is also a JUDOKA. In November 2007 at the Judo World Cup in Birmingham he was awarded his 9th DAN by Densign White, chairman of the British Judo Association.

Japanese JUDO pioneer. With Gunji Koizumi, Tani introduced JUDO to England and Europe. He studied the shin-no-shindo style of jujutsu and went to England in 1989, where he gained fame by defeating all comers in wrestling matches. When in 1918 Koizumi founded the BUDOKWAI he appointed Tani Chief instructor. Tani remained at the BUDOKWAI until his retirement in 1937 following a stroke. Toni and Taro Miyake wrote one of the first English-language books on jujutsu, The Game of Jujutsu, published in 1906.